The Next Big Thing - Blog Hop

Phonetically, "blog hop!" sounds like it might be something rude in an Eastern European language, but it's more like a game of tag. A blogger blogs about a certain topic (in this case, 10 questions about your book), then tags another blogger. She posts on that topic and tags somebody else. My thanks to ML Skinner for tagging me on this blog hop!  Check out her blog at www.mlskinner.com/blog4.

I think I was the last one out there to get tagged. So I have no one to tag.  Guten tag!


2)  Where did the idea come from for the book?
It all started when I moved into a funky apartment by the beach and kept getting mail for the previous tenant... really cool mail... way better than my own mail, to be honest.  (read all about it http://amybriant.blogspot.com/2011/01/truth-is-out-there.html)


3)  What genre does your book fall under?
1980s rock'n'roll lesbo murder mystery in a Northern California beach town.  With a Rottweiler.  Yeah.  That genre.


4)  Which actors would you choose to play your characters in a movie rendition?
I'm not sure who would play Hev (short for Heavenly), my protagonist, but Melissa Benoist, who plays Marley on Glee, is PERFECT for Jules, the girl next door!!! 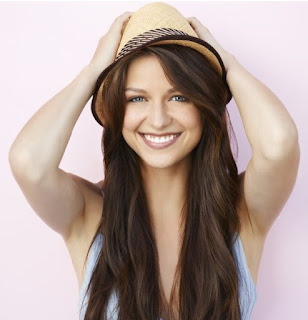 5)  What is the one-sentence synopsis for your book?
In the summer of 1982, Heavenly Wilcox moves into a bitchen beach apartment - only to find herself at the center of a dangerous and tangled web of murder, missing persons, rock 'n' roll and sex with all the wrong people.


6)  What is the longer synopsis for your book?
It's the summer of 1982. College dropout Heavenly Wilcox is thrilled with her new apartment in the Northern California beach town of San Tomas--even with the trombone-playing lesbian downstairs and the surly ex-cop next door. Heavenly (“Hev” to her friends) has a good job at the county Public Defender's office, a best friend in aspiring rock star Mona Murdock, and maybe even a new boyfriend on the horizon, one whose ambitions are exceeded only by his tattoos. So why does she keep thinking about that girl downstairs?


Also fascinating to Hev is the intriguing mail that continues to be delivered for the previous tenant of her new apartment, a man who mysteriously disappeared a few months back. A few harmless questions and one clearly inappropriate use of the county's computer system later, she finds herself at the center of a dangerous and tangled web of murder, missing persons, rock 'n' roll and sex with all the wrong people.


With each new twist and turn, Hev finds it hard to say who's the villain and who's the victim. And it's even harder for her to admit that she is not who she thought she was. The only thing she knows for sure is:  if she can't figure out what's going on, the next victim might just be her!


7)  Will your book be self-published, or represented by an agency?
Neither!  HEAVENLY MOVES will be my third novel published by Bella Books.  Go, Bella!


8)  How long did it take you to write the first draft of your manuscript?
Although this is my third novel to be published, it's actually the first novel I ever tried to write. So, while the other two took one-ish to two-ish years to write apiece, I started HEAVENLY MOVES in the early 1990s, got stuck in a major way, took a loooooooong break, picked it back up in late 2008 after finishing SHADOW POINT and finally finished the first draft in July 2009. And then lived in a tent in the woods for a month. But that's another story. So, how long did it take me to write the first draft of HEAVENLY MOVES?  Many, many years.  Finishing that manuscript is one of the hardest things I've ever done in my life.  Don't give up, Aspiring Authors out there!  Perseverance is all.


9)  Who or what inspired you to write this book?
Me - 90% of this book is autobiographical. I'm happy to say murder and (most of the) mayhem fell into the other 10% category.


10)  What else about your book might pique the reader’s interest?
Music is very important to me and it saturates this novel. I believe this book is very funny.  I believe it is a thriller.  But it is also a coming out story and an opportunity to reflect on matters such as identity, integrity and that thing each of has hidden deep in the most secret corner of our hearts.

Labels: anyone else remember hoppity hooper HEAVENLY MOVES what is your damage Heather