2011 was a great year for me as an author - a year of many firsts. If Mr. Peabody will scoot over just a tad ("Tsch!"), there's plenty of room for you to join me in my literary time machine to revisit some of the highlights. Please, no eating in the time machine. We'll stop in 1972 for a snack - bowl of Quisp, anyone? 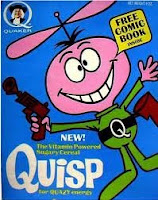 Why he had to be armed to sell us cereal, I will never know. The sugar content and the awesome green bodysuit already had me enthralled.

Anyhow, clearly the best time/place to start our recap o' 2011 would be in 2010. Specifically, December 2010. Two major things happened in that month to Author Amy: #1, SHADOW POINT was released. #2, I submitted the completed manuscript of ROMEO FAILS to my publisher, Bella Books.

February 2011 brought the exciting news that (a) someone had actually read SHADOW POINT and (b) liked it enough to give me an award! Thanks again, wonderful and discerning women of the Alice B. Awards!

Around the same time, I had finished my editing of HEAVENLY MOVES - the first novel I started, the second one I finished and (it appears) the third one to be published. I share this with you as an example of how a writer is often focusing on three different projects at once, with each project in a different phase:

It can be a bit challenging to shift gears and redirect one's concentration from (for example) the ghost story to the Midwestern love story to the 1982 murder mystery. Lots of different characters and plots running around loose in my brain, that's for sure. Fortunately, 90% of them are thinly disguised/vastly improved versions of myself, so... yeah.

Speaking of The New Manuscript, aka the work in progress, April 2011 was when I started writing my post-apocalyptic young adult tale, THE BOOK OF KELL. Eight months and 63,000 words later, I'm about 80% done. This one has been a lot of fun to write! There's something so relaxing and care-free about the post-apocalypse, wouldn't you agree?

Back to the highlight reel: In May 2011, I was thrilled to be invited to attend the Saints & Sinners literary festival in New Orleans where I gave my first public reading! Woo hoo. (dat)

June was my first Golden Crown Literary Society (GCLS) convention in Orlando, where I was honored to receive a Goldie for best debut author. The chance to meet other readers and writers of lesbian fiction was all that I expected. GCLS also brought my first autograph. (aw shucks)

June 2011 was a swell month for me as a newly published author. SHADOW POINT was (favorably!) reviewed in the Lambda Literary Review that month. Lara Zielinsky of www.blogtalkradio.com/readingslab was kind enough to interview me on her online radio program that month. I also received my first check from the publisher that month!

I'm excited about 2012 and hope you are, too. Valentine's Day is guaranteed NOT to suck this year due to ROMEO FAILS going on sale that day. How 'bout that?! You are welcome. :-)

Thanks again, Dear Reader, for making my 2011 a memorable and rewarding year. I look forward to our literary adventure continuing in 2012 and beyond.