Beautiful But Flawed But Beautiful!

I'm excited to say that the first draft of Novel #5 is complete!  It's beautiful, but flawed.  Just like me.  (Fortunately, I can fix one of us.) 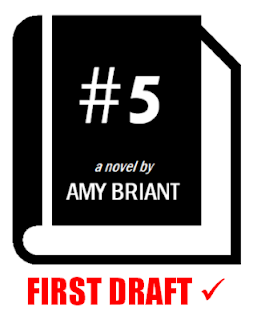 Now you may be thinking, "Whoa! That was fast. How the heck did she churn out ANOTHER novel when THE BOOK OF KELL just came out in February 2020?"  Well, (a) thanks for thinking of me, and (b) I sent KELL off to the publisher way back in August 2018.  As previously noted, there is A LOT of necessary and value-adding back-and-forth that happens between the author and the publisher before the final product gets published.  But there's also a lot of time in that period where nothing is happening in regards to Book About To Be Published.

After I sent KELL off in the late summer of 2018, I took a breath, then wrote some short stories.  (including one that blossomed into a 30,000 word novella)  In December 2018, I began Novel #5.  (I do have a title in mind, but I'm playing it close to the chest for now.  I have my reasons, Dear Reader.)  So to answer your question, YES!  By Amy standards, that was hell of fast for me to complete the first draft of Novel #5, from December 2018 to April 2020 - a blazing pace of just 17 months.  Far faster than any previous first draft and a reflection of my much improved writing skills and habits, I'm happy to say.

Because, yeah, it's a mystery!  Set in present day San Tomas, my fictional version of the real Santa Cruz, CA.  (and the universe in which THE BOOK OF KELL and HEAVENLY MOVES were set)

So I've reached the major milestone of completing the first draft of Novel #5.  There are many more to be achieved before it ever sees the light of day.  To employ a construction-related simile:
- if the original idea was the blueprint...
- and the outline was the foundation, the framing and the roof...
- then the first draft is like having the wiring and plumbing in, the floors laid and the drywall up

Lots more work to do to make that structure move-in ready for the reader!  (Note to self:  Stop watching so much HGTV.)

On to the second draft!

Thoughts on Pride & Prejudice, Bad Parenting & What Happens When You Reread A Book