It took me a long time to write THE BOOK OF KELL.  As I labored to finish it, something happened that always happens around the 2/3 or 3/4 mark.  This is a well-known phenomenon to writers - you're trying to finish one thing when suddenly your brain produces An Amazing Idea For Something Else!  Ooh, shiny!


It takes discipline to keep working on the current project and bring it to completion without diving into that bright shiny new idea.  This involves NOT thinking about it.  Do you know how hard it is to NOT think about something?  Something you really want to think about, but know you shouldn't?


I was mostly successful at keeping The Amazing Idea at bay while I kept my focus on THE BOOK OF KELL.  Sometimes I had to beat it off with a broom, shouting invective like "No!  Back!  It's not your turn yet!  Ow, that's my ankle, you little *&^%$#@!"


But not entirely successful.  Sometimes a line or a phrase or a plot twist would sneak through my defenses and end up on a scrap of paper.  Meanwhile, years were passing while I finished THE BOOK OF KELL.  Now that I've begun work on Novel #5 (AKA The Amazing Idea), I have a large pile of pithy notes, many of them legible.  Here's a small sample of them: 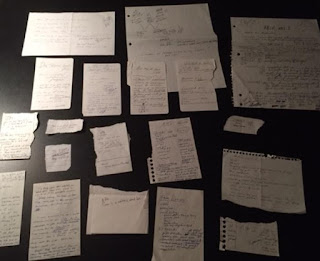 With my favorite being: 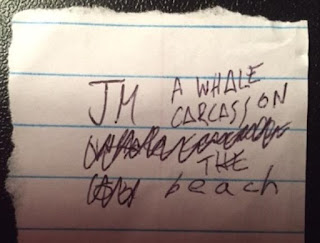 That one is SO in the book.  (Sing along with me now, to the tune of "and a partridge in a pear tree" - AND A WHALE CARCASS ON THE BEACH!)


Not the most organized way to start writing a novel, but you work with what you've got.  The plan is to never do this again.  We'll see how that turns out...
Labels: Novel #5 THE BOOK OF KELL writing