Tuesday Who Day: Meet The Mongol

Long ago, I would occasionally drive past a bar in the Clairemont area of San Diego which I now think was Horatio's Moonglow Lounge. 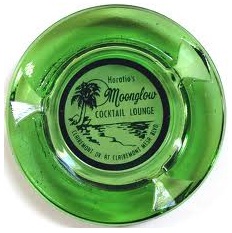 I never set foot in the place. (sorry, Horatio) (not sure I was 21 yet) Anyhoo, the neon sign that said MOONGLOW had some bulbs out. Maybe it was supposed to look something like this:

I would just catch a glimpse of the sign as I whizzed by in my trusty pickup. My brain decided it was not MOONGLOW with a few letters missing; no, my brain decided it said MONGOL. I seriously thought the bar was named THE MONGOL.

Maybe the house special was a gin & tonic called the Genghis Khan-ic?
Or a pitcher of Mongol-itas?
With some Mongol Horde-ouevres?

Eventually, I realized it was Moonglow, not Mongol.


But the dream lives on in HEAVENLY MOVES! In the book, the biggest, bestest nightclub in town is The Moonglow, but due "to ongoing problems with its neon sign, the Moonglow was known as the Mongol to its slightly dyslexic faithful."


Name aside, the club is based on my memories of The Catalyst in Santa Cruz, CA.  I played there a few times in the 80s with different bands.

[dang it, i was trying to insert a pic here, but this confounded Holiday Inn wifi is not worth spit!]


Back in the fictional world of San Tomas, the Mongol is a crucial setting throughout the book. It's a what or a where, not a who, but is too important not to make the Tuesday Who Day cut.  ¡Viva el Mongol!