One of my favorite characters in SHADOW POINT is not a person. (or even a ghost!) He's an English bulldog named Henry the Eighth. Just to avoid any confusion between my Henry and the king of the same name, I thought a brief comparison would be in order: 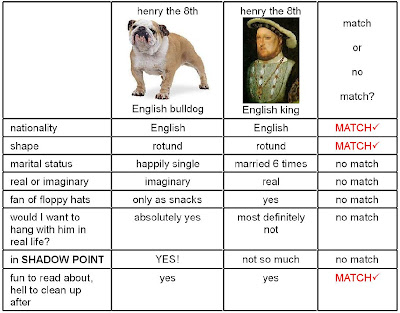 To learn more about my Henry the Eighth, you'll have to read SHADOW POINT, coming to a bookstore near you in December 2010! Or order directly from the publisher at http://www.bellabooks.com/ when we're a little closer to December. In the meantime, Henry says "hi" and he thinks your dog would like to go for a walk now.
Labels: dogs Henry VIII SHADOW POINT