I recently sat down with the main character of SHADOW POINT, protagonist Madison McPeake, to do a brief 3-question interview. Here you go:

Amy: You have been described as "having more vices than graces" - how do you feel about that?

Madison: I have?! What the f-
Amy: (warningly) Madison!
Madison: I mean, wow. Hmmm... Well, I think I have about the same ratio of vices to graces as most people do. Maybe they're better at hiding their stuff? I'm just honest and up front. I know a lot of people don't like that. People like their reality sugar-coated - I do understand that. I prefer an unfiltered approach myself. A lot of times people think I'm joking or being sarcastic when I'm actually just stating my honest opinion... (laughs softly) Hey, I'm just trying to do my best to raise my five year old niece, deal with my personal issues, and fight off a malevolent phantom - you know what I mean?

Amy: (nods) So, If SHADOW POINT is ever made into a movie, who would you like to play you?

Madison: Can I play myself?

Amy: No. You're imaginary.

Madison: Crap. All right. (thinks it over) Well, in that case, I nominate the actress Taylor Schilling, who is simply terrific on NBC's Mercy. She's got the perfect blend of intelligence, wit, courage, attitude, work ethic, and vulnerability. Plus, she's smokin' hot. 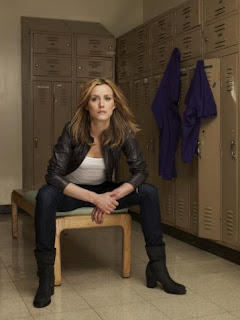 Madison: I know! That picture doesn't even do her justice. You have to see her in action. So, do you think SHADOW POINT will ever be a movie?

Amy: Probably only if I win the lottery and finance it myself.

Madison: Well, get crackin'! Did you buy a lottery ticket today?

Amy: (mumbles) Uh, not yet. (clears throat) But anyhow, back to the interview. One last question - despite being imaginary, you have your own Facebook account. Is that challenging?

Madison: No, I've often suspected that most of the people on Facebook are imaginary.

Amy: Well, that's all the time we have for today! Thanks for the interview.

Madison: You're quite welcome. I'm always here if you need me.
Labels: interview Madison SHADOW POINT